The Maze Runner Wiki
Register
Don't have an account?
Sign In
Advertisement
in: Characters, Group B, Immunes,
and 9 more

View source
watch 01:01
Who is Aris Jones?
Do you like this video?
Play Sound

Member of Group B (formerly)

Aris Jones is the only male member of a group of female teenagers called Group B. His name is likely a shortened form of Aristotle, the great mathematician.

In The Fever Code, Aris is first introduced as another kid who was partnered with Rachel in building the second Maze. The pair had a telepathic connection. When the Flare broke out among some of the WICKED staff and Ava Paige told Aris, Rachel, Thomas, and Teresa that they would have to kill the infected, Aris was resigned to doing it for the greater good, though Rachel seemed disgusted by the idea of killing them.

At the end of the book, in the email to the staff apparently written by Teresa, it is mentioned that Aris would actually be keeping his memories while in the Maze, telepathically coordinating events with Teresa but pretending he had amnesia like the other subjects.

In The Scorch Trials, Group B escaped from a place called Maze B and took refuge in a gym, where Aris was abducted by WICKED and placed in the room of the only female member of the Gladers, Teresa. He was discovered by a member of the Gladers named Thomas, who was searching for Teresa. Aris said that he didn't know anything about Teresa, and Thomas took him back to the dorm where the other Gladers were sleeping. One of the Gladers, Newt, believing Aris to be a spy of WICKED, decided to interrogate him. During the interrogation, Aris introduced himself and revealed them about Group B and discovered he could communicate telepathically with Thomas. The Gladers discover Aris' tattoo on the back of his neck, which reveals that he's "The Partner" according to WICKED.

The next day, a Glader named Winston informed Aris and the Gladers about a man in the common room they dubbed Rat Man. A few minutes later, Rat Man told the Gladers about the Scorch Trials. Rat Man told them that he is a member of the organization WICKED and that most of the world's governments have disintegrated and the surviving governments banded together to form what would become the organization WICKED. He also reveals that the Gladers have all been infected by the Flare and they must reach a Safe Haven in two weeks where they will be given a cure and that they must use a Flat Trans to depart at 6:00 or they will be executed.

The next morning, Aris and the Gladers step through the Flat Trans and find themselves in a pitch dark tunnel. While they walk through that tunnel they get attacked by molten steel balls that completely enclose the victim's head and finally cut it off the neck. The survivors find a stair leading up. Opening a trap door, they emerge to a wasteland known as the Scorch. Somewhere throughout the Gladers' quest, Teresa probably told Aris telepathically that WICKED wanted them to make Thomas feel utterly betrayed, and that unless they did it, Thomas would be killed. It is unknown if this is completely true, however, as according to The Fever Code Teresa and Aris were both secretly working with WICKED.

After surviving a freak lightning storm and making it into the city, Aris and the other Gladers met Brenda and Jorge, a teenage girl and a man who claimed to be Cranks. Thanks to Thomas, they formed an uneasy alliance, but shortly afterward they were forced to run for their lives when some other Cranks blew up part of a tunnel near them. Aris and the others were separated from Thomas and Brenda during the evacuation. Afterwards, Jorge led Aris and the Gladers most of the way through the city.

When the Gladers saw Thomas and Brenda in trouble from three Cranks, Aris presumably participated in their rescue. Afterwards, Thomas contracted an infection from being shot in the shoulder, and WICKED came with a berg to help him. While Thomas was gone, Aris and the others stayed in an old shack outside the city. After Thomas was returned to them, Aris and the Gladers were confronted by Group B, now led by Teresa. The girls took Thomas hostage and warned the Gladers that if they followed them to their camp to rescue Thomas, they would open fire on the Gladers, leaving the Gladers no choice but to continue through the mountains to reach the Safe Haven.

Sometime while in the mountains, Aris snuck away from the Gladers unnoticed. He made his way to where a freed Thomas and Teresa were waiting. As part of the betrayal plan, Aris snuck up on Thomas with a drawn knife, telling him to go to a location in the mountains with Teresa. They went into a cavern, and Aris and Teresa started kissing, which was all part of the betrayal. Then they forced Thomas into a smaller gas chamber built into the rock, striking him on the head repeatedly as he fought back. When Thomas woke up the next morning, Aris and Teresa apologized for their actions and said that, on the night Aris was taken to the Gladers, Teresa was abducted by WICKED and given instructions by them to make Thomas feel betrayed or else WICKED would kill him.

The three teenagers noticed the Gladers and Group B in the distance and Aris ran down the mountains with Thomas and Teresa to regroup with them. They were reunited with their groups at the safe haven. Suddenly, canisters emerged from the ground and released Bulb Monsters created by WICKED that attacked the group. Aris helped fight and kill the monsters after discovering their weak spots. A berg arrived shortly after the Gladers succeeded in killing the monsters, and Aris, along with the rest of the Gladers, climbed aboard the berg and escaped from the valley. On the berg, Aris and the Gladers celebrated their success before landing at WICKED's headquarters a few hours later.

In The Death Cure, Aris' Phase Three trials are unknown. It is possible that, being part of WICKED, Aris and Teresa never went through any Phase Three trials at all. It is revealed that Aris is among those immune to the Flare. He is also one of the subjects who want their memories back (even though he already has his memories). This group escapes and eventually gets captured by the Right Arm in Denver. Of all the subjects that WICKED used in the Trials, Aris is one of the few to survive, along with Thomas, Minho, Gally, and Frypan.

In the Death Cure film, Aris, Sonya, and a group of Immunes are rescued by Thomas, Newt, Frypan, Brenda, Jorge, Vince, Harriet, and the Right Arm and taken to a hideout by them.

While Aris, Vince, Sonya, Harriet, the Right Arm, and the Immunes sleep, Thomas, Newt, Frypan, Brenda, and Jorge leave the hideout to go into the Last City to rescue Minho.

Aris is described as a boy who has olive skin and "dark hair cut surprisingly short". It is implied that he was taller than Teresa, as she had to stand on her toes to reach his cheek for a kiss.

In the films, Aris is portrayed by Jacob Lofland, who has light skin and brown hair. 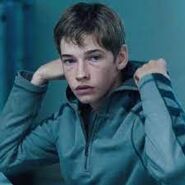 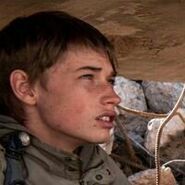