The Maze Runner Wiki
Register
Don't have an account?
Sign In
Advertisement
in: Article stubs, Characters, Gladers,
and 10 more

This article is a stub. You can help The Maze Runner Wiki by expanding it.

Keeper of the Med-jacks (formerly)

Clint is a minor character in The Maze Runner, who makes it through Phase Two of the Trials and is a Munie. He was one of the two Med-jacks in the Glade, the other being Jeff. The pair is almost always seen together.

In The Maze Runner, Clint first appeared early in the book. However, his presence became more known with the arrival of Teresa. He was not expanded upon much, yet it is known that he is one of the two Med-jacks, with Jeff being the only other one. Clint was one of the many Gladers who went with Thomas to combat the Grievers and survived.

In The Scorch Trials, Clint was one of the boys who participated in the Phase Two Trial, the Scorch, and survived.

In The Death Cure, Clint was only mentioned near the book's conclusion, as being one of the Immunes Thomas rescued from the Maze. He escapes and makes it to the safe haven.

In the Maze Runner film, Clint is present when Thomas arrives in the Glade, When Thomas starts to run, but trips and falls, Clint and the Gladers laugh at this.

At night, at the bonfire, Newt introduces Thomas to Clint and Jeff, who he says are the Med-jacks who spend most of their time bandaging up the Slicers. Clint watches Thomas and Gally wrestle before the latter sends the former to the ground, causing him to remember his name.

The next day, Ben gets stung by a Griever and attacks Thomas. Clint and the Gladers manage to restrain Ben, see the Griever sting on his stomach, and take him to the Pit.

Later, Clint and the Gladers banish Ben from the Glade.

The next day, Clint is present when Thomas, Minho, and Alby return to the Glade.

In the Homestead, Clint points out that Thomas has killed a Griever during the Gathering when Gally suggests that Thomas should be punished for going into the Maze to help Minho and Alby.

Clint is also present when Teresa arrives in the Glade.

Later, Clint and Jeff come and fetch Thomas, telling him that Teresa has woken up.

At night, in the medical hut, Alby starts attacking Thomas, but Clint, Newt, and Jeff are able to restrain Alby, allowing Teresa to inject the serum she had with her when she arrived in the Glade into his chest.

Clint is later seen helping Alby when the Grievers attack at night. He trails off behind them and disappears and is killed off-screen by a Griever.

In the Death Cure film, Clint's name was engraved on the memorial rock along with all the names of the people killed in the war with WCKD.

Clint is described in the book as being rather short, with grey hair already conquering his usual black. In the film, he is shown with brown curly hair, average height, a little chubby. 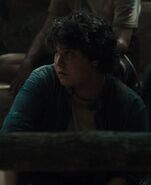 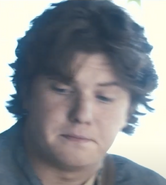