The Maze Runner Wiki
Register
Don't have an account?
Sign In
Advertisement
in: Characters, Group B, Female Characters,
and 8 more

Leader of Group B


"I have to admit, I'd like some revenge."
— Harriet exacting vengeance on WCKD, The Scorch Trials

Harriet is first introduced in The Scorch Trials. She was one of the leaders of Group B. She was most likely named after Harriet Tubman.

When Harriet is first seen in The Scorch Trials, it is implied that she and Sonya had had some kind of authority over Group B before Teresa arrived, possibly as a parallel to Alby, being similar in appearance and a stronger, no-nonsense personality than her counterpart Sonya. She and Sonya help Thomas feel betrayed by Teresa by dragging him through the Scorch in a burlap sack. Later, they feel guilty and save Thomas from being killed by Group B by talking Teresa out of killing him.

In The Death Cure, Harriet follows Teresa's lead and allows WICKED to give her memories back. She escapes WICKED shortly afterward with the others of Group B, plus Teresa and Frypan, and goes to Denver. She and the other Immunes are captured by the Right Arm as part of a ploy to take down WICKED. Later, as WICKED's headquarters are being blown up by a string of bombs set up by the Right Arm, Harriet is one of the many Immunes who make it through the Flat Trans to safety.

In the Death Cure film, Harriet helps Thomas, Newt, Frypan, Brenda, Jorge, Vince, and the Right Arm rescue Aris, Sonya, and a group of Immunes and take them to their new hideout.

While Harriet, Aris, Brenda, Jorge, Vince, Sonya, the Right Arm, and the Immunes sleep, Thomas, Newt, and Frypan leave the hideout to go to the Last City to rescue Minho.

In The Scorch Trials, Harriet is pretty and described with having dark brown skin and hair that is cut almost to her scalp.

In the films, Harriet has warm brown skin and is depicted with long dreadlocks that fall a little past her shoulders. 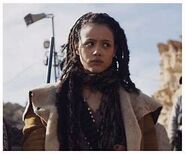