The Maze Runner Wiki
Register
Don't have an account?
Sign In
Advertisement
in: Characters, Gladers, Group A,
and 8 more

"Yeah, what if Thomas is right? Maybe he can lead us home."
— Jeff to Gally about Thomas

Jeff was one of the two Med-jacks in the Glade, the other being Clint. The two were almost always together. He was a minor character in the book, but his role was greatly expanded in the film, upgrading him to a supporting character. Jeff was most likely named after Thomas Jefferson.

In The Maze Runner, Jeff is most prominently present when Ben is going through the Changing at the beginning of the book, when Teresa arrives, and when Thomas, Minho, and Alby are brought back from the Maze alive, as well as any other medical emergency mentioned.

Jeff was present when Teresa woke up, but she kicked him in the groin, climbed out of the window, and met Thomas.

It is unknown whether or not Jeff survived the escape from the Maze or if he made it through the Scorch Trials. But due to the only listed surviving Gladers being Thomas, Teresa, Minho, Frypan, Newt, Billy, Tim, Jack, Winston, Jackson, Stan, Clint and 7 unnamed gladers. and must have been killed at some point in the Trials.

In the Maze Runner film, Jeff is present when Thomas arrives in the Glade. When Thomas starts to run, but trips and falls, Jeff and the Gladers laugh at this.

At night, at the bonfire, Newt introduces Thomas to Jeff and Clint, who he says are the Med-jacks who spend most of their time bandaging up the Slicers. Jeff watches Thomas and Gally wrestle before the latter sends the former to the ground, causing him to remember his name.

The next day, Ben gets stung by a Griever and attacks Thomas. Jeff and the Gladers manage to get Ben off Thomas.

Later, Jeff and the Gladers banish Ben from the Glade.

The next day, Jeff is present when Thomas, Minho, and Alby return to the Glade.

In the Homestead, during the Gathering, Jeff is present when Gally suggests that Thomas should be punished for going into the Maze to help Minho and Alby.

Jeff is also present when Teresa arrives in the Glade.

Later, Jeff and Clint come and fetch Thomas, telling him that Teresa has woken up.

At night, in the medical hut, Alby starts attacking Thomas, but Jeff, Newt, and Clint are able to restrain Alby, allowing Teresa to inject the serum she had with her when she arrived in the Glade into his chest.

The next day, when Thomas and Minho return to the Glade, Jeff watches Thomas and Gally argue with each other, when Teresa calls out to them and the Gladers and tells them that Alby is awake.

When the doors stopped closing, Jeff was heavily featured and met up with Thomas about what to do. He survived the attack, but Clint didn't.

The following morning, Gally attempts to sacrifice Thomas and Teresa to the Grievers. Jeff and Winston confronted Gally about it. Jeff was the second person to leave to go with Thomas, following Winston.

Jeff is shown to be one of the Gladers that goes into the Maze with Thomas to escape. Shortly after, Jeff is overpowered and killed by a Griever while attempting to save Minho. He is the third, and last to perish in the Griever ambush.

In the Death Cure film, Jeff's name was engraved on the memorial rock along the names of the victims in the war with WCKD.

Jeff is described as being tall with a buzz cut and a nose that is the size of a fat lemon. He was also shown to be somewhat well built and skinny. 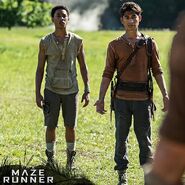 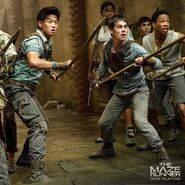