Group A consists of the Gladers. Group A was composed almost entirely of boys, with Teresa being the only girl. It is said that the Group A boys were named after scientific figures. The leaders were Alby and Newt (second-in-command) when Thomas arrived. Each member of Group A appears to match up to one of Group B's, and the experiences of the two groups in the Maze appear to have been extremely similar.

Group B is a second group who participated in the Trials. The Gladers only discovered this when they met Aris Jones at the beginning of The Scorch Trials. Group B was composed almost entirely of girls, with Aris being the only boy. It is said that the Group B girls were named after religious figures. The leaders were Harriet and Sonya until Teresa arrived. Each member of Group B appears to match up to one of the Gladers, and the experiences of the two groups in the Maze appear to have been extremely similar. One major difference was that Rachel was killed by Gally's equivalent in Group B, but in the Gladers, Chuck jumped in the way of the knife when Thomas should have been killed. They escaped from the Maze three days faster and lost less members than the Gladers, which the girls appear to be proud of; showing that they are fairly capable.

Before Group B began the Scorch Trials, they were told by Janson that they must kill Thomas if they wished to receive the cure when they arrived at the Safe Haven. They were allowed to travel through underground tunnels through the Scorch, while the Gladers were forced to travel overland in the burning sun. After they ambushed the Gladers, took Thomas, and dragged him up into the mountain pass, Thomas convinced them not to kill him. Group B and the Gladers met up at the Safe Haven, and they fought together against the Bulb Monsters.

Members of Group B 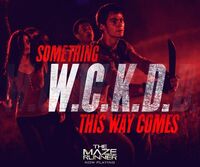 World In Catastrophe: Killzone Experiment Department, generally abbreviated to WICKED (WCKD in the film series), is an organization originally formed to find a cure for the Flare. After the Sun Flares, the remaining governments of the world combined their resources to set this organization up, for the world was in desperate need for a cure. For the purpose of experimenting, they selected about a hundred teenagers, including Immunes and control subjects. They passed them through the Trials, such as the Maze and the Scorch, which involved various variables which were designed to stimulate the Killzone of the brain so they could record specific patterns. They planned to use these killzone patterns to discover why these subjects' brains were able to fight off the Flare, hopefully allowing them to produce a cure. Thomas, Teresa, Aris, and Rachel are all WICKED members that went through the trials.

Throughout the series, Teresa and Ava Paige frequently mention that WICKED is good, because saving the human race is worth the sacrifice of a few members of it. However, WICKED eventually strays from this goal when they fail to obtain a cure for the Flare, and embark on dangerous activities (depleting the Immunes) to keep their organization alive. Thus Teresa turns against WICKED, and Ava Paige is among the few remaining members of WICKED who oppose the idea of repeating the trials (which would sabotage the last remaining hope for the human race).

WICKED's ultimate fate is unknown, although it is safe to assume that WICKED is destroyed by the Right Arm during their attack in The Death Cure.