Rosa Bianca Salazar is an American actress who was born in Canada, with Peruvian and French roots.

Salazar portrays Brenda in the film adaptation of James Dashner's The Scorch Trials, and reprises the role in Maze Runner: The Death Cure, released in 2018. 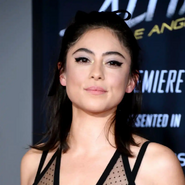