"You see those guys? There, by the fire? Those are the Runners. That guy in the middle there, that's Minho, he's the Keeper of the Runners. Now every morning, when those doors open, they run the Maze, mapping it, memorizing it, trying to find a way out."
— Newt to Thomas in the Maze Runner film

Runners are the only ones who are allowed to go out into the Maze. They are defined as the strongest and fastest of the Gladers. Runners run the Maze every day, trying to find a way out. The maps they make are saved in the Map Room. They leave when the Doors open in the morning and return right before the Doors close. The Keeper of the Runners is Minho.

Being a Runner is often described as being very risky, as Grievers are a frequent sight throughout the Maze. They must be very precise to make it back on time. A Runner also has to be very fit physically, since exploring the Maze requires running for the whole day.

Every day, after the Runners make it back before the Doors close, they return to a concrete building known as the Map Room, where they draw, record, and map the changes they could observe in the Walls movements. Their goal is to solve the maze and escape.

Runners are elected at the Gathering. 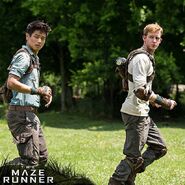