The Maze Runner Wiki
Register
Don't have an account?
Sign In
Advertisement
in: Vocabulary, Places, The Glade

The Box is a metal elevator located in the center of the Glade that brings weekly supplies to the Gladers and a new Glader every month. Every Glader's arrival is signaled by a loud alarm, usually half an hour before the actual arrival of the Box.

No one knows anything about it or who controls it. It comes from a dark and deep hole, seemingly endless. The Box doesn't move if a person is standing in it. Past attempts at escaping the Maze included sending a Glader down into the hole after the Box descended. However, this proved a fatal result as the person was cut in half by an unseen force after climbing ten feet down. The Box has been noted to occasionally take requests from the Gladers for specific items. This was done by writing the desired item(s) on a piece of paper and dropping it into the Box.

In The Death Cure, upon returning to the WICKED headquarters, it is revealed that the Box is only a few floors beneath the Glade Proper and the Gladers are manipulated into thinking the trip is much longer. 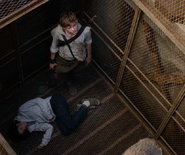