A blog of me trying to tell whos who in the glade.

According to tvwish, Langston is the muscular brunette.

has a twitter page, either the dude with the afro or dreadlocks.

Also has a twitter page. Doesn't resemble any gladers that i can tell though.

The boy with slicked back hair. Also in other films but i couldn't see him.

Appeared in Ausmodified and Yeah the Boyz. I couldn't find any footage of either. 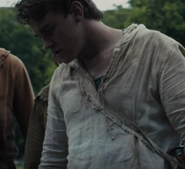 Weston Rachal
Add a photo to this gallery
Retrieved from "https://mazerunner.fandom.com/wiki/User_blog:DrwuburnapIII/Minor_Actors_of_TMR?oldid=64813"
Community content is available under CC-BY-SA unless otherwise noted.
FandomShop Newsletter Paramount+