The Maze Runner Wiki
Register
Don't have an account?
Sign In
Advertisement
in: Characters, Deceased, Gladers,
and 10 more
English

Keeper of the Track-hoes (formerly)

Zart was the Keeper of the Track-hoes/Gardeners, and was one of the first Keepers that Thomas worked with. Sometimes, the other Gladers call him Zart the Fart. It is possible that he was named after the genius composer, Wolfgang Amadeus Mozart.

In The Maze Runner, Zart is first introduced not only as the Keeper of the Track-hoes, but also as the only Glader willing to answer any question, despite the fact that he is not really talkative.

He always appears at Gatherings, and was the one to lead the Banishment of Ben. In Thomas' Gathering for what to do with him, he supports Thomas for saving Minho and Alby in the Maze, thinking that he should not be punished. On the second day of the Griever attacks, he fell victim and didn't make it back.

In the Maze Runner film, Zart is present when Thomas arrives in the Glade.

In the Maze Runner film, Zart is present when Thomas arrives in the Glade. When Thomas starts to run, but trips and falls, Zart and the Gladers laugh at this.

At night, at the bonfire, Zart watches Thomas and Gally wrestle before the latter sends the former to the ground, causing him to remember his name.

The next day, Ben gets stung by a Griever and attacks Thomas. Zart and the Gladers manage to get Ben off Thomas.

Later, Zart and the Gladers banish Ben from the Glade.

The next day, Zart is present when Thomas, Minho, and Alby return to the Glade.

In the Homestead, during the Gathering, Zart is present when Gally suggests that Thomas should be punished for going into the Maze to help Minho and Alby.

Zart is also present when Teresa arrives in the Glade.

Later, Zart goes with Thomas, Minho, Frypan, and Winston into the Maze to investigate a dead Griever.

At night, when the Grievers attacked the Glade, Zart hides with Thomas, Teresa, Jack, Mike, and Billy in the cornfields. A Griever grabs Zart, pushing him to the ground. Thomas tries to grab Zart, but the Griever throws him away deeper into the cornfield, presumably killing him, as he is not seen again.

In the Death Cure film, Zart's name was engraved on the rock along the names of victims from the war with WCKD.

In The Maze Runner, Zart is described as a quiet, black-haired, tall, quite big and broody boy with a long face and droopy eyes that make him look as bored as possible. It is also mentioned that Zart smells like sour milk. In the film adaptation, Zart is played by Joe Adler, who has blond hair. 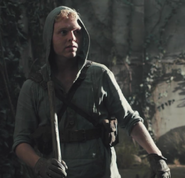